If I’m honest, I don’t love the beach. There, I’ve said it. Yes, yes, it is beautiful. But I’m more of a go-out-and-explore than a toes-in-the-sand-with-a-beer-in-my-hand kind of person. So it was with some trepidation that I set aside a week to go to the Outer Banks of North Carolina. I am quite clear on how silly that sounds. My lovely mother lined it up so that my sister and her family and I and my family could come together with her for a week at one of the most popular beach destinations in the Eastern United States, and I’m feeling trepidation? I’d probably make a good extra in an Adam Sandler movie.

We’re now in the second half of beach week. We’ve gone to the pool, we’ve caught some rays, we’ve gone to the beach, we did battle with some large waves and decent riptide, and we (I) got a small crustacean stuck in our swim suit. With a couple of days to go, I was thinking that was it – rinse and repeat – although hopefully I could avoid another sand crab incident. But then my wife and better half decided to pull on a thread that has been dangling in front of us. All of our rooms include this seemingly obligatory picture of horses on the beach. Someone mentioned something about wild horses at dinner the other night, but we didn’t think it was a real thing. I mean, this is the modern, arguably overdeveloped Eastern sea board of the US, and it’s the beach. Horses? Pulling out her trusty mobile device, she quickly learned that there is in fact a not-quite-indigenous population of wild horses roaming free on a 7,500 acre stretch of American beach.

In the year 1492, there was this Italian guy who left from Spain to find a short route to the East Indies. He kind of muffed it. But, he did run across this new place that had some prospects. You’ve probably heard that story. So fast forward a bit and pretty soon the Spanish are sending boats to the American coast pretty routinely. The Outer Banks, it turns out, are particularly difficult to navigate. A naturally occurring string of barrier islands that span 200 miles, there are shoals and riptides and all kinds of fun little things for boats to stumble upon. No one knows for sure, but it is assumed that either the horses were tossed off a grounded ship to lighten the load or they somehow survived a wreck. Either way, a group of Spanish war horses (their DNA has been verified) made it to shore in the Outer Banks and have been hanging out in the wild for about 500 years.

Now, I’m an American and I love America, warts and all. But one of the things we Americans are not good at is leaving well enough alone. So forgive me when I declared shenanigans at the idea of a rogue colony of Spanish War Horses living on the beach in North Carolina. I think it would have been much more likely that settlers discovered the horses, tamed them, and their story was swallowed up by history. What I didn’t realize is that the Outer Banks are a relatively new build-out. As late as 1985, there were no paved roads in the Corolla Beach area. So at this point, the horses have been here a good bit longer than the people.

Hop In My Hummer

My skepticism in check, I’m now fully on board. I’ve got to see this. My wife unholstered her trusty smartphone to figure out that Wild Horse Adventure Tours was the best gig in town. We were able to pick our tour time, complete the transaction, and sign the waivers all from the phone. Fantastic! But wait, it gets better. The company has outfitted original Hummers with 12 bucket seats for passengers in an open air environment. The evening was cool for North Carolina and again, the tour company was on point with blankets for all the passengers. We met our Tour Guide, Pippy, whose enthusiasm for the area and the horses was infectious. So we sat in comfort and made the 20 minute trek out to Currituck National Wildlife Refuge.

The tour was fantastic. It included a good bit of the natural and human history of the area as well as the horses. Pippy masterfully guided the Hummer back into the dunes. The first thing that struck me about the area was the number of gigantic beach houses interspersed among the dunes. I want to be clear here. There are no roads. To get to these mostly two-story homes built on at least one story of stilts to avoid the floods, people have to have 4X4 vehicles to navigate the dunes and trapped water in the area. Also, I don’t quite understand how they’re building in a wildlife refuge, but this is much more like the America I know. If you’ve got a cool million to throw at a beach house in a probable flood plain that has no roads and requires a rugged vehicle to reach it, we’ll find you a permit to build. But I digress. We were back in the dunes about five minutes before finding our first harem of horses. The herd is made up of about 100 horses, but these split off into harems as the males are quite territorial. A harem is comprised of at least one stallion and one mare, but – to quote Pippy, “The stallion will take on as many mares as he can handle, usually 3-5.” The horses are beautiful, and I’m sure they are wild. However, they’re certainly not easily spooked. As we drove around the only navigable parts of the dunes, we frequently came quite near the horses as we passed by slowly. We were even treated to a good look at the herd’s only colt of the season, as he was eating grass next to an outdoor air conditioning unit in the backyard of one of the mega-houses. In all cases, the horses went on about their business grazing and doing what horses do as we and other tour companies patrolled the area.While we did not see horses running and frolicking in the waves as the pictures in our condo would suggest, it was still an excellent experience. We learned a little history, saw a good bit of the dunes between the Atlantic and the Currituck Sound, got fairly up close and personal with some wild Spanish War Horses, and got to do all of it in the comfort of a well-navigated Hummer. If this is life at the beach, I am revising my future beach-going trepidation.

Here are a few more photos I took on our travels 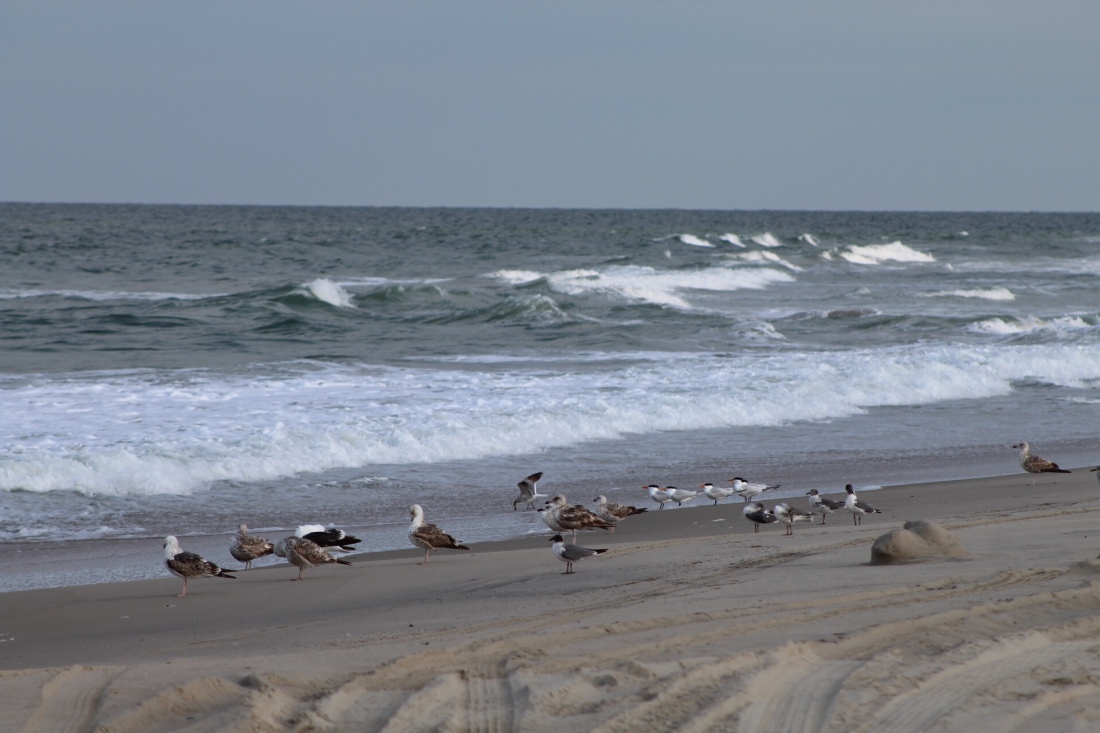 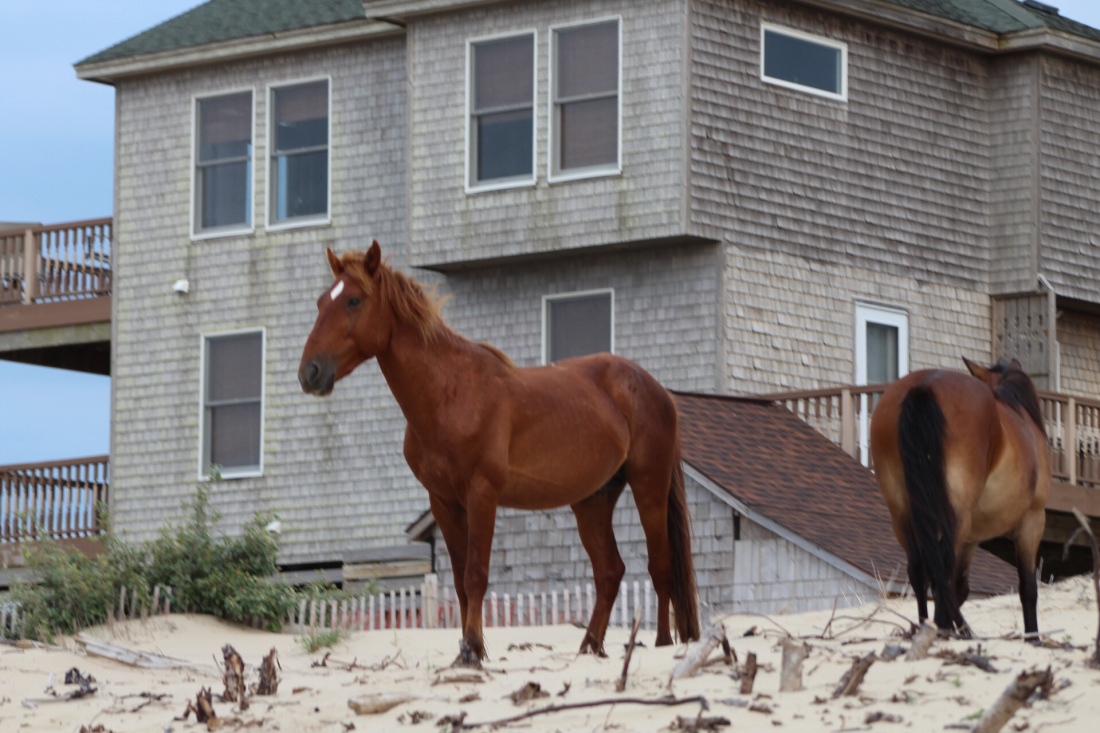 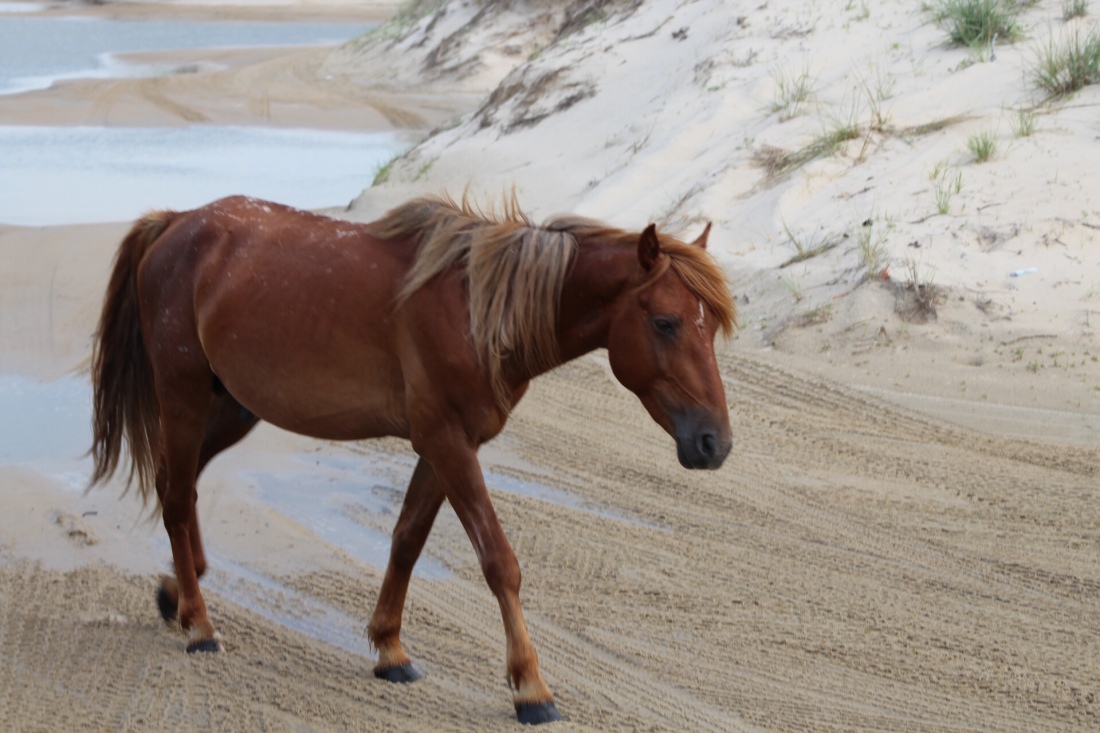 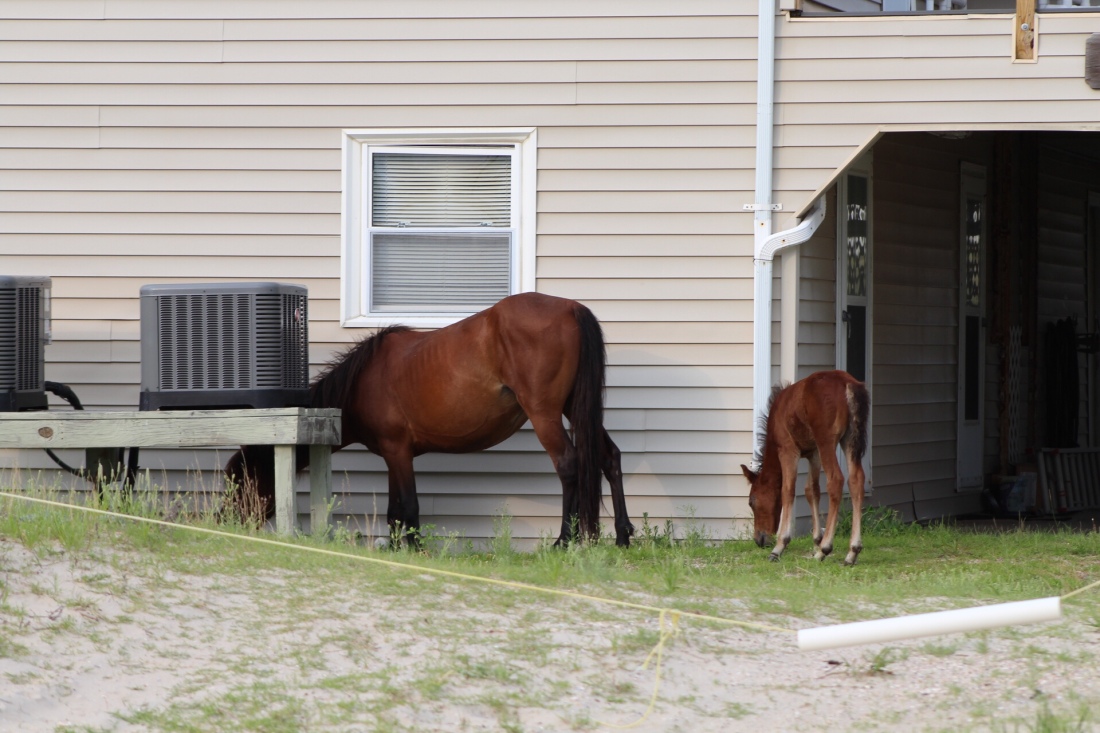 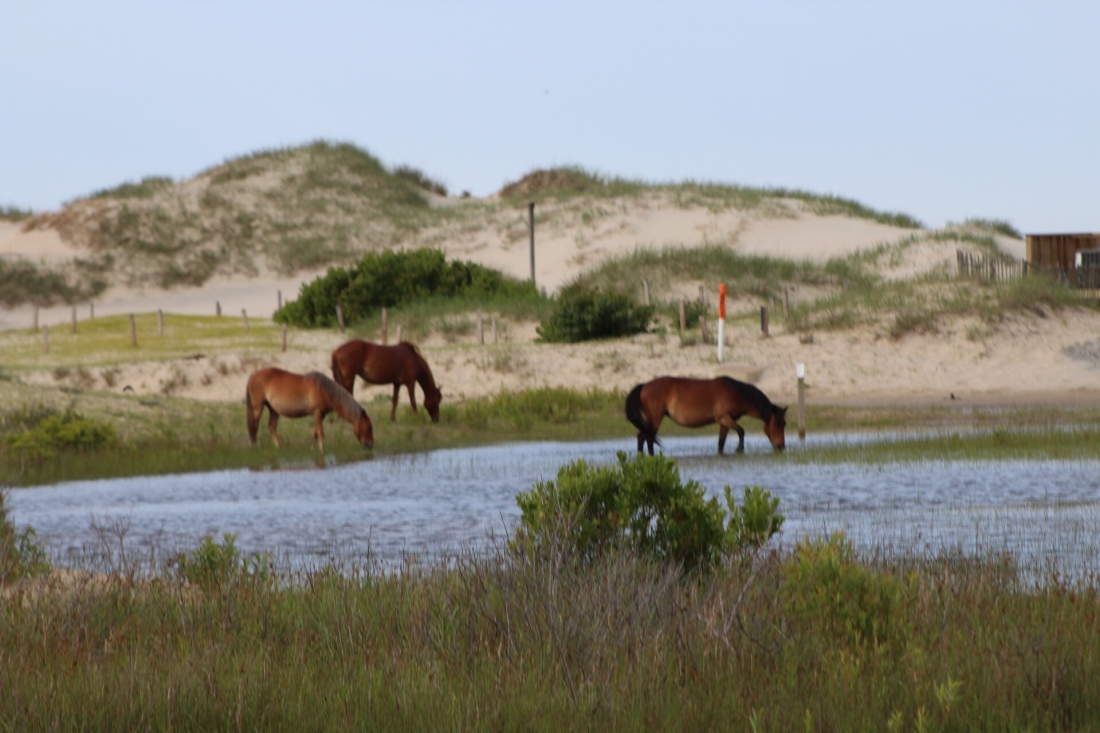 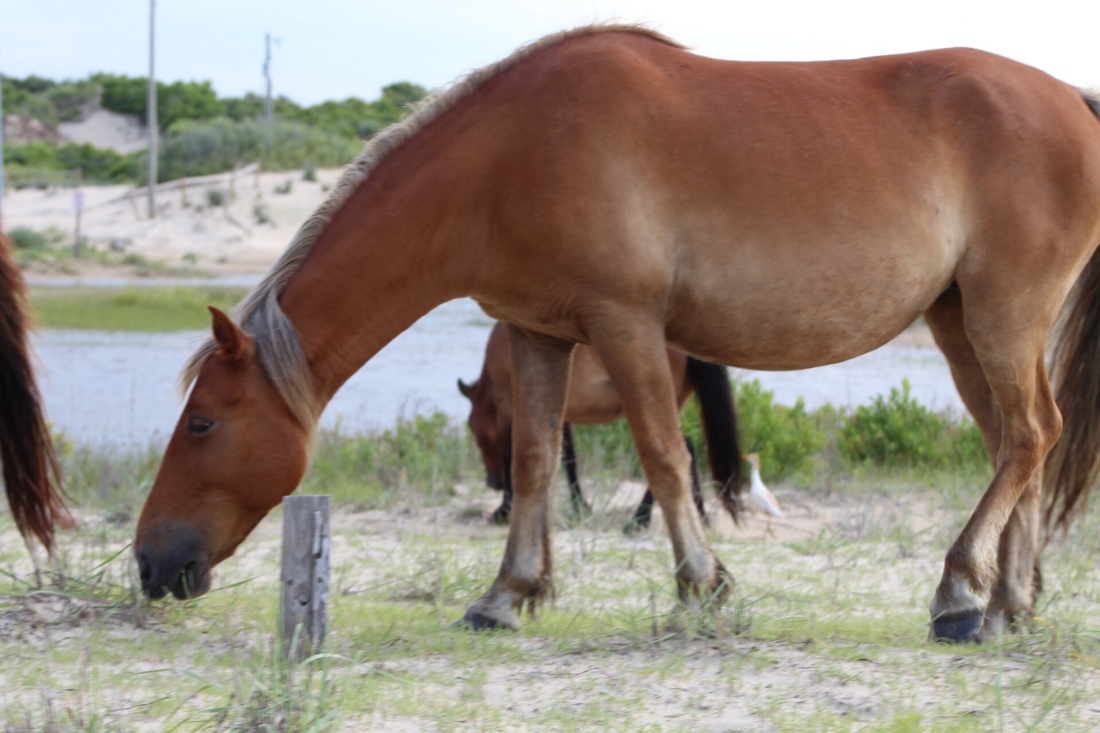 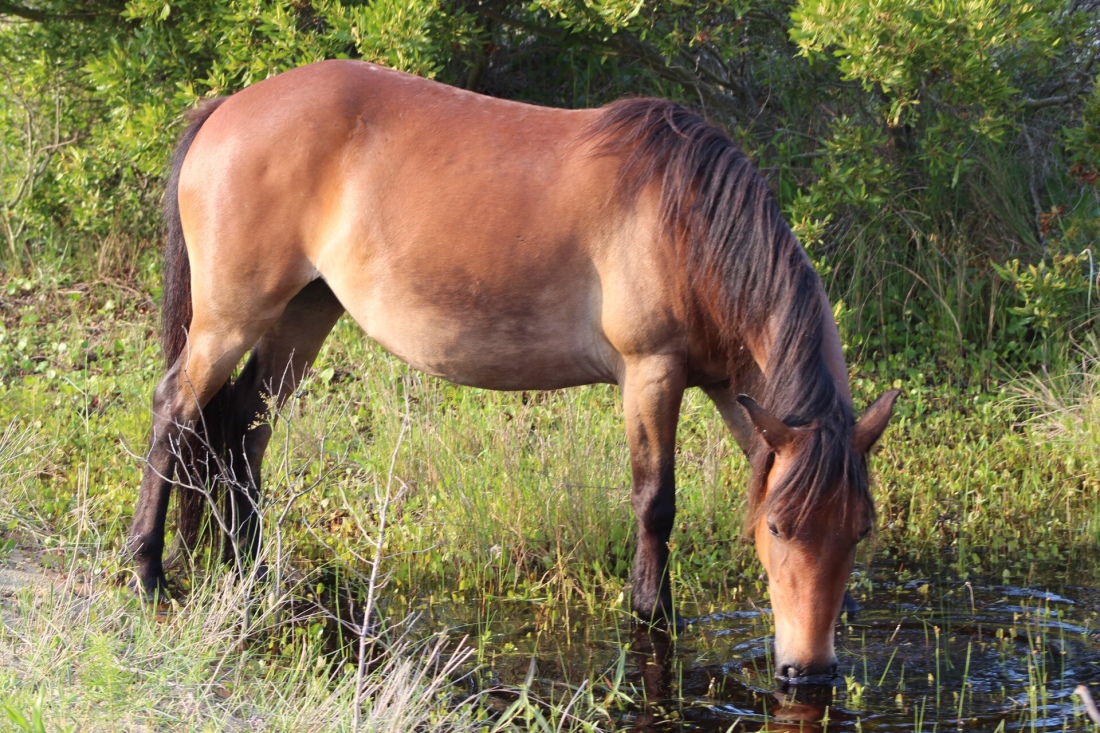 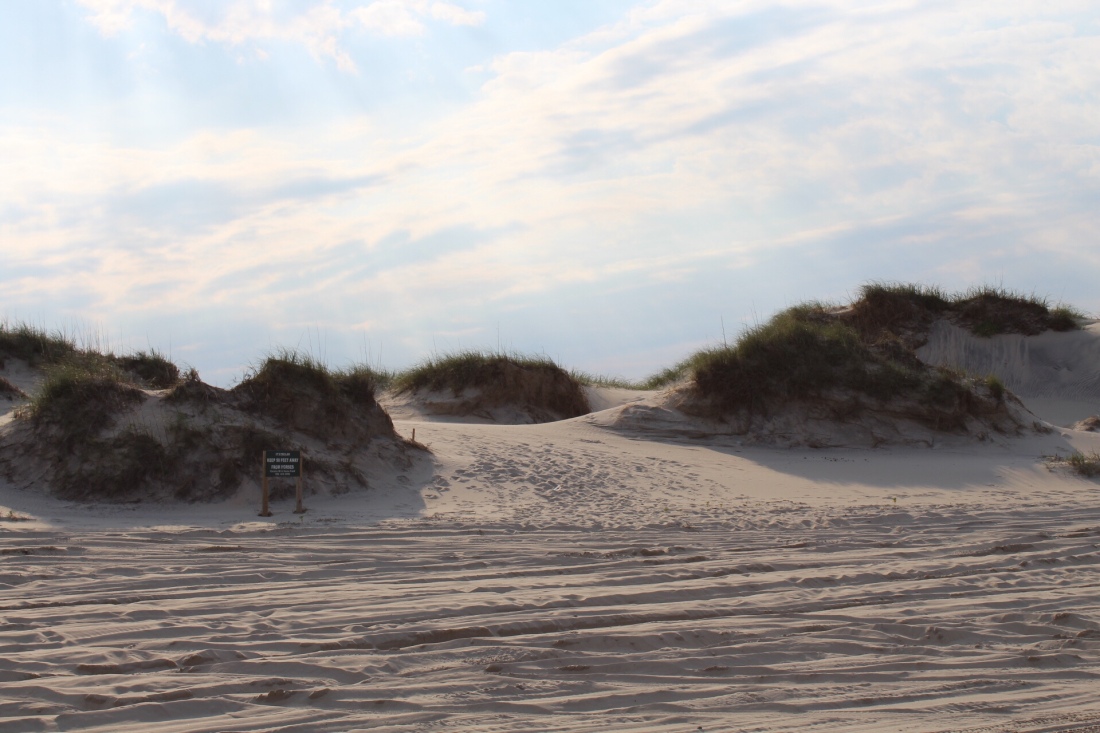 I finally climbed at Endless Wall today. My climbing was terrible but with views like this, the frustration lasted about 1.2 seconds. Still hard to believe I get to hang out here with so many amazing friends
Beautiful day for a run
Rocks and Roots trail run after the remnants of a tropical storm. There is no substitute for getting outside, even when it’s a bit gloomy.
Just some good friends outside solving problems.
Alum Creek Lake days. Disc golf with @xavierggregory at midday and mountain biking with Melanie and Jackson in the late afternoon. Pretty much the perfect fall day. Nice to not be traveling for once in a month or so.
Yesterday’s travels took us from Moab to Capitol Reef National Park and then on to Las Vegas. We made sure to stop for the pies made in the park from fruit grown there. We had dinner reservations so we hurried a bit. Our recommendation if you go to Utah is 1.) Zion 2.) Arches and then 3.) Capitol Reef. Bryce and Canyonlands are a distant tie for 4 and 5. See Melanie’s account for Las Vegas fun 😂